The project is supported by DFG.

Wireless underground sensor networks (WUSNs) are an emerging and promising research area. The goal is to establish efficient wireless communication between wireless devices that operate below the ground surface. Significant attention to WUSNs capabilities for monitoring various underground conditions is caused by the variety of existing and potential applications.

The underground environment has a unique nature. It has a significant and direct impact on the communication performance, creating challenges for hardware design and system deployment. 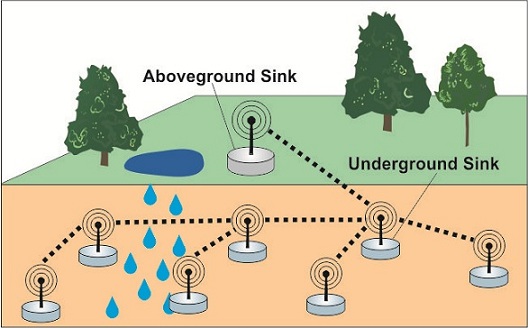 Performance of EM-based WUSNs is very limited due to harsh propagation conditions. Magnetic induction (MI)-based WUSNs, which make use of magnetic antennas implemented as coils, improve the transmission range due to a much lower pathloss.

For the analysis of channel capacities of MI-WUSNs, a reliable and comprehensive system model is needed. The well known effects of frequency splitting (multiple resonances) need to be incorporated in a common pathloss and noise descriptions. 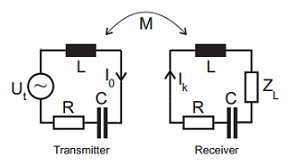 A characteristical property of direct MI transmission scheme is a strong dependancy of the pathloss on the soil conductivity described by the eddy currents effect (similar to the skin effect in metals), which yields an optimal operation at very low resonance frequency for sufficient large transmission distances.

In general a highly frequency-selective pathloss for the MI based signal transmissions results. An important observation is furthermore that the thermal noise signals coming from the utilized resistors is not white as frequently assumed. The reason is the voltage division in the receiver circuit, which depends on the circuit impedances.

Several passive relays can be deployed between two transceiver nodes in order to extend the transmission range. This idea was originally proposed in context of MI based metamaterials. Using the same strategy as for the direct MI, the current flow in the second coil yields a secondary magnet field, which influences the third coil and induces a voltage there. Hence, this signal propagation can be seen as a so called traveling MI wave. Since misalignments and limited precision of the system deployment are inevitable, power reflections at every device need to be considered, which makes the concept of the „wave“ not very practical.

Block diagram of the MI-waveguide includes additionally (k -1) passive relays, which are placed equidistantly between the transceivers.

For MI waveguides, the optimal resonance frequency can be chosen much higher in order to increase the magnetic induction between each two relay coils, yielding much lower pathloss between these coils and for the whole waveguide in general. However, the choice of the resonance frequency is not trivial (in general non-convex) and constrained by the physical elements of the system:

These constraints have a strong impact on the signal attenuation and frequency-selectivity of the pathloss functions and can lead to a significant performance degradation.

Basically, the main task of the WUSNs is related to data collection. Therefore, the tree-based network architecture seems to be best suited for this purpose.  We restrict ourselves to the simply connected spanning trees, since it is preferable to avoid circulating data in the network due to the limited data rate in the underground communication systems. As it is common in WSNs, each sensor (root) node not only transmits its own sensed data, but also relays the data from the (leave) nodes connected to it. For this, we apply a decode-and-forward relaying scheme in our works. The data from the whole network is then guided to the sink node, which either stores it or retransmits to an aboveground device. An example of the network deployment is given in the Figure. 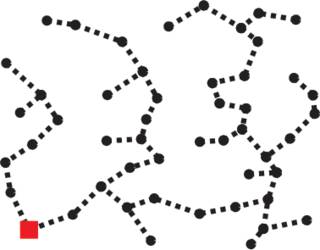 An example of a WUSN with 50 sensor nodes (black circles), which are wirelessly connected (black lines), including a sink node (red square).

An important performance metric for the network design is the throughput. However, there are several definitions of the network throughput depending on the application. We focus on the minimum (bottleneck) throughput among all network links, which is defined as follows

where Ci represents the achievable data rate (usually given by the channel capacity) of link i, Nstreams, i stands for the number of data streams to be served by the root node i and Ninterferers, i denotes the number of relevant interfering signals, which may disturb the packet reception.

There are two possible approaches for the design of MI-WUSNs: direct MI based and MI waveguides based. These two approaches differ in the propagation characteristics and properties of the signal transmission. Hence, the design and optimization strategies differ as well.

In order to simplify the manufacturing of the devices and to reduce the costs, we choose all passive elements to be identical in all used devices. Hence, in direct MI based WUSNs, all sensor nodes have identical structure and sets of passive elements. For the MI waveguides based WUSNs, we need to distinguish between the actual transceiver devices and the less complex relay devices for the waveguides. Hence, devices of the same type (transceiver or relay) have identical structure.

A commonly used criteria for the design of a point-to-point signal transmission is the channel capacity, which can be calaculted using the well known Shannon’s capacity equation:

where B is the width of the transmission band, Pt(f) is the transmit power density spectrum complying with the waterfilling rule, Lp(f) is the frequency-selective pathloss function, and Pn(f) is the noise power density spectrum. As mentioned earlier, both Lp(f) and Pn(f) heavily depend on the system parameters like resonance frequency, coil windings, conductivity of the soil, etc. Hence, an optimization problem for maximizing C under practical design constraints needs to be formulated and solved. In general, this optimization is non-convex and a multi-scale algorithm is used for finding the optimal solution.

Due to the quasi-omnidirectional propagation of the magnet field in direct MI transmission based WUSNs, there is a strong impact of the interference signals coming from different sensor nodes.

It seems to be a good strategy to exploit the polarization property of the field in order to separate these streams. This separation, called interference polarization, is done via rotating the axes of the coils in the optimal direction, which results from the global network optimization. For this, an iterative algorithm is proposed, which reduces the impact of the interfering signals and improves the signal quality for the bottleneck link. In addition, the system parameters are optimized in order to further reduce the pathloss and increase the data rate.

Correspondingly, the network topology is one of the key parameters to be optimized. Traditionally, for the design of the tree-based MI-WUSNs, the minimum spanning tree (MST) approach is chosen, which is optimal in many cases. However, its optimality holds only under not always bearable assumptions, like weak coupling between relay coils (although the opposite is desired) or equal number of interfering signals per transceiver. Hence, an advanced topology design is needed. Finding the optimal topology for the MI waveguides based WUSNs, so called advanced spanning tree (AST), is an important part of the global network optimization and is carried out using an interative algorithm, which improves the performance with respect to the bottleneck throughput. Furthermore, the polarization of the magnet field can be exploited in order to improve the coupling between the relay coils of the bottleneck waveguide. Here, the difficulty is due to the power reflections at the waveguides connected to the same transceiver. In order to avoid high losses of signal power, all coils (transceivers and relays) can only be rotated at once. For the global optimization it yields the full search of the common axes orientation.

In order to enable the signal transmission and reception, more realistic transmit/receive/equalization filters and modulation scheme need to be developped for the MI transmissions. The typical channel transfer functions and corresponding impulse responses are shown in the Figure.

Due to the aforementioned difference in nature between direct MI transmission and MI waveguides based approaches, the modulation and filter design for these two schemes may differ as well.

In general, we assume a smooth band-limited waveform for pulse shaping, which complies with the √cos impulses. For the receive filter we utilize the whitened matched filter, such that an additive white Gaussian noise results after sampling in the receiver. For the optimal design, we utilize the capacity achieving minimum mean-squared error (MMSE) based decision feedback equalizer (DFE). For the digital filters we choose the maximum filter length of 100 taps. Furthermore, we utilize M-QAM modulation, which can be selected by the designer based on the signal quality measurements and target error rate.

For the direct MI transmission, the equivalent discrete-time impulse response is very long (up to several 10000 channel taps!). The reason is a very high frequency-selectivity of the transmission channel despite a large bandwidth as it results from the optimization. Such impulse responses cannot be equalized using filters with only 100 taps. In particular, for the feedback filter of the DFE the filter length must be at least the same length as the impulse response (\approx 10000 taps) in order to provide a sufficient performance. However, such long filter lengths are not practical. In order to reduce the frequency-selectivity of the channel, a three-band based frequency-division approach is proposed, which provides the achievable data rates close to the channel capacity while keeping the effort of signal processing low.

In addition, the power allocation can dramatically improve the performance oft he system, such that results of up to 70% of channel capacity can be reached.

For the MI waveguides, the channel impulse response is not too long („only“ 10-15 taps). A different problem arises in context of modulation scheme selection. Due to a very limited bandwidth of this scheme, all transmit power is allocated to a very small set of frequencies around the resonance frequency. Therefore, a high signal-to-noise ratio (SNR) results, which enables modulations of up to 18 bit/symbol! Such modulation schemes are however not practical, especially for the small sensor devices. Therefore, a bandwidth expansion algorithm is proposed, which converts the benefit of a high SNR into the benefit of a larger bandwidth.

Design of the modulation schemes for MI-WUSNs

The design of the modulation scheme for the whole MI-WUSN can be done based on the results provided for the point-to-point transmissions. However, following the principle of utilizing the the same set of system parameters, a common modulation scheme (or a small set of possible modulation schemes) needs to be determined, which may maximize the achievable data rate of the bottleneck link. In addition, the signal bandwidth must be chosen identical for all network links in order to ease the implementation of the transmit and receive filters. Therefore, an optimal network design should combine the approaches of network optimization with that of the modulation and bandwidth selection. This can be done using a full search in the space of all available system parameters.

Due to a strong interconnection between any two magnetic induction enabled devices, there is an impact of the receiver circuit and the MI channel on the current flow in the transmitter. By introducing an additional load impedance in the transmitter and connecting it to the signal reception components, this impact can be detected. Of course, an offset signal not related to the transmission channel needs to be excluded first. The result can be utilized for the transmitter-side channel estimation, such that the transmit power and its distribution can be adjusted automatically without explicit feedback signaling. Two approaches are proposed, which either collect many samples of the desired signal and combine them by means of maximum likelihood in order to obtain the channel attenuation or exploit the mismatch between the filters of the DFE, which occur in case of sudden changes of the attenuation.