Recently, green communication has received considerable attention because of environmental concerns. In particular, the cellular networks consume world-wide approximately 60 billion kWh per year. 80% of the electricity in cellular networks is consumed by the base stations (BSs) which produce over a hundred million tons of carbon dioxide per year. These figures are projected to double by the year 2020 if no further actions are taken. Hence, especially in the case when BSs are not connected to the power grid, energy harvesting is very appealing since BSs can harvest energy from natural renewable energy sources such as solar, wind, and geothermal heat, thereby reducing substantially the operating costs of the service providers.

Although the amount of renewable energy is potentially unlimited, the intermittent nature of energy generated by a natural energy source results in a highly random energy availability at the BS. For example, solar energy and wind energy are varying signiﬁcantly over time due to weather and climate conditions. In other words, a BS powered solely by an energy harvester may not be able to maintain a stable operation and to guarantee a certain quality of service. Therefore, a hybrid energy harvesting system design, which uses different energy sources in a complementary manner, is preferable in practice for providing uninterrupted service.

Due to the time varying availability of the energy generated from renewable energy sources, the introduction of energy harvesting capabilities for BSs poses many new challenges for resource allocation algorithm design. 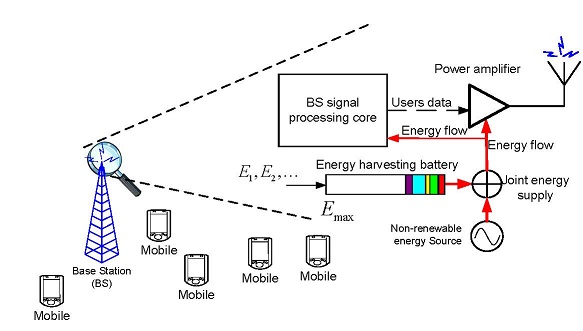 Conventional natural energy resources, such as solar and wind energy, are weather- and location-dependent, which may be unsuitable for mobile communication devices deployed in modern communication networks. An energy harvesting technology that overcomes the above limitation, is wireless power transfer, where the nodes charge their batteries from electromagnetic radiation. 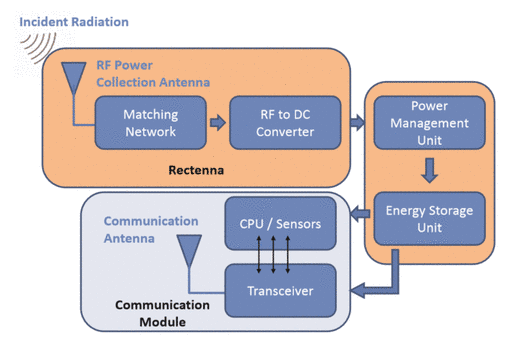 Orthogonal frequency division multiple access (OFDMA) is a viable multiple access scheme for spectrally efficient communication systems due to its flexibility in resource allocation and ability to exploit multiuser diversity. On the other hand, the increasing interest in high data rate services such as video conferencing and online high definition video streaming has led to a high demand for energy. This trend has significant financial implications for service providers due to the rapidly increasing cost of energy.

Because of severe path loss attenuation, the efﬁciency of SWIPT technology is in general unsatisfactory for long distance transmission unless advanced resource allocation and antenna technology can be combined.

MIMO can be exploited to bring two distinct beneﬁts to SWIPT networks. On the one hand, due to the broadcast nature of wireless transmission, the use of additional antennas at the receiver can yield more harvested energy. On the other hand, the extra transmit antennas can be exploited for beamforming, which could signiﬁcantly improve the efﬁciency of information and energy transfer. 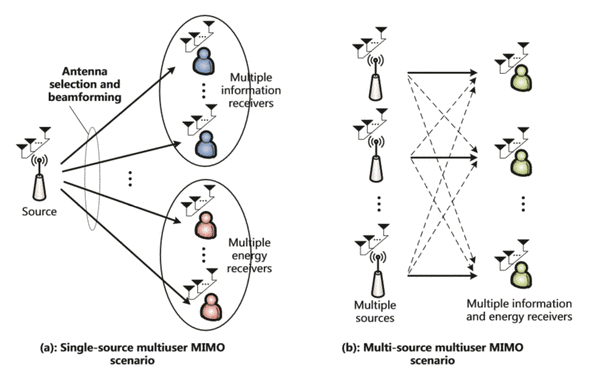 Higher transmit power, which facilitates energy transfer from the transmitter to the receivers, leads to a larger susceptibility for information leakage due to the broadcast nature of wireless channels. Possible remedies include: 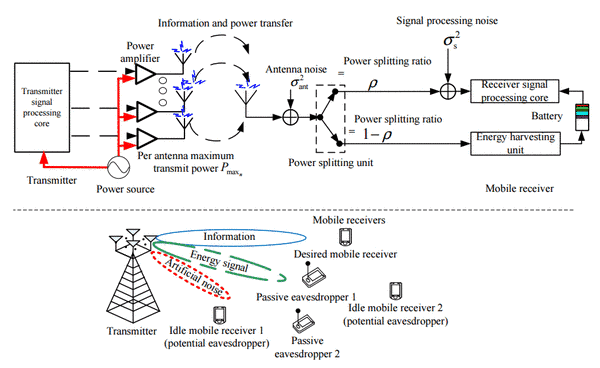 Multiuser system model with 3 legitimate mobile receivers and 2 passive eavesdroppers. The upper half of the figure illustrates the block diagram of the transceiver model for wireless information and power transfer.

The performance of wireless power/energy transfer systems is severely limited by the distance between the transmitter(s) and the receiver(s) due to the high signal attenuation caused by path loss and shadowing. Distributed antennas are an important technique for mitigating interference, reducing the network power consumption, and extending service coverage. A promising architecture for distributed antenna networks is to split the functionalities of the base station:

The RRHs are distributed across the network and connected to the CP via backhaul links. This system architecture is known as cloud computing network. The distributed antenna system architecture reduces the distance between the transmitters and receivers. Yet, transferring the information data of all users from the CP to all RRHs, as is required for full cooperation, may be infeasible when the capacity of the backhaul links is limited. Hence, resource allocation for distributed antenna networks with finite backhaul capacity is another important research challenge. 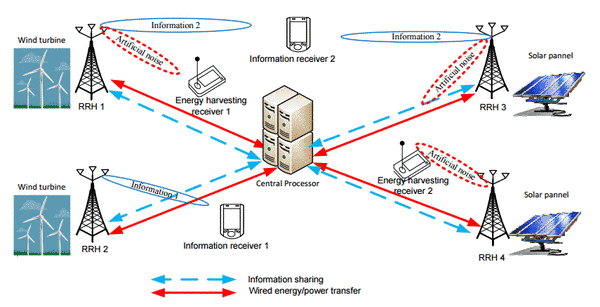 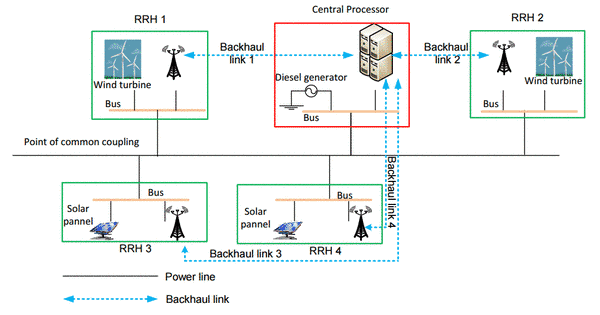 A simplified micro-power grid model with a point of common coupling connecting a central processor and 4 remote radio heads.