Buffer-aided relaying is a new paradigm for wireless cooperative networks. In particular, buffers enable half-duplex relays in a cooperative network to adaptively choose whether to receive or transmit a packet in a given time slot based on the instantaneous quality of the receiving and transmitting channels. In contrast, in conventional relaying, the half-duplex relays have a predefined schedule of when to receive and when to transmit independent of the instantaneous quality of the receiving and transmitting channels. Usually, in conventional relaying, the relay receives in one time slot and forwards the received information to the destination in the following time slot.  We illustrate the benefits of buffer-aided relying for a simple example. However, many extensions are possible, see below.

Consider the basic cooperative network. It consists of a source S, a half-duplex relay R, which is equipped with a buffer, and a destination D.

Assume the direct source-destination link is not available and therefore the source can communicate with the destination only through the relay. Assume that the network operates in a wireless environment. Thereby, the source-relay and relay-destination links are affected by slow flat time-varying fading, i.e., the channel quality significantly varies over time. Let the time be divided into slots of equal lengths such that the fading over a single time slot can be considered constant. Assume that the source and relay transmit packets which span one time slot. Hence, each packet transmitted by the source or the relay sees a constant channel. Furthermore, assume that source and relay employ capacity-achieving codes, such as LDPC or polar codes, so that error-free communication is possible provided that the data rate does not exceed the link capacity. Since the fading is constant during each time slot i, the capacities of the S-R and R-D channels, denoted by CSR(i) and CRD(i), respectively, are also constant during each time slot i. For simplicity, we assume identically distributed fading on the S-R and R-D channels, i.e., E{CSR(i)} = E{CRD(i)} holds, where E{·} denotes expectation. Note that this restriction is introduced for simplicity of illustration only.

The optimal buffer-aided protocol maximizing the throughput for the considered simple network is as follows:

Performance of the Buffer-Aided Protocol

For the considered simple cooperative network, employing the buffer-aided protocol, the following ergodic rate is achieved

Rergodic,BA = 0.5 E{max (CSR(i), CRD (i))}
On the other hand, the conventional relaying protocol achieves for the considered cooperative network the following ergodic rate

The figures below show the ergodic rates and outage probabilities, respectively, achieved with conventional and buffer-aided relaying. 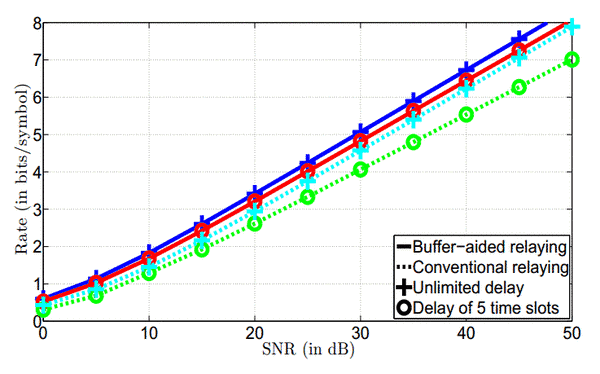 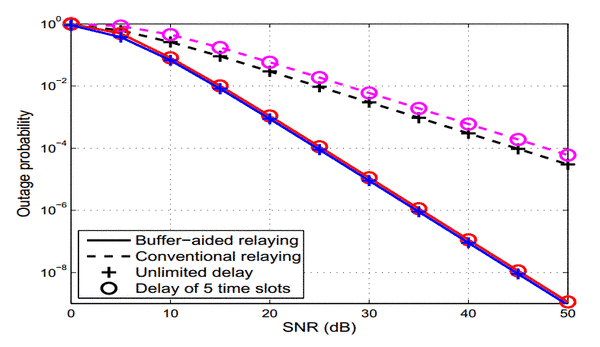 There are many open research problems for buffer-aided relaying. In the following, we list some of these problems.

Buffer-aided relaying protocols require CSI of the transmitting and receiving links. For most of the current work, only the case of independent and identically distributed fading with perfect CSI has been considered and the degradation due to non-ideal CSI is unknown.

The next generation of wireless communications requires more complex protocol to meet with the quality-of-service (QoS) requirements. Therefore, buffer-aided relaying protocols can be well-adopted to enhance the performance of the 5G communication systems. To this end, new buffer-aided relaying protocols should be developed with respect to other candidate setups for 5G, e.g., cognitive radio systems, free-space optical systems, mmWave systems, etc.

In the following, we provide a brief (and incomplete) overview of the existing literature on buffer-aided relaying (note that each journal paper is included only in one category due to space constraints, however, it may cover multiple categories).